Radiation: Audit Until They've Got It 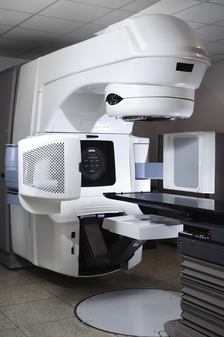 Usually you start by having a special CT scan to map out the radiation. Some days later, after the radiation is designed, it's time to start.

The radiation staff bring you into the radiation room (like the room on the left). They lie you on the table and position you. They leave the room, and then do some imaging to make sure you're in the right place.

Then the beam turns on. You don't feel it. You get up and leave the room.

​The same thing repeats, usually for several days and weeks.

​Seems straightforward. But it's not.

How does the machine know where to put the radiation?

It all depends on human input.

The radiation doctor is ultimately responsible for outlining the areas to be treated and the normal tissues to be avoided. Part of this job is often delegated to other members of the team, and double-checked by the doctor.

Properly-designed radiation plans are like nice paintings, with all the brush strokes in the right places. Top-quality radiation can be very effective.

Improperly designed plans are a problem. They can lead to lower chances of cure, or higher chances of side-effects. Some of these issues have been highlighted in media reports, including a 2010 series in the New York Times.

Safety is a big priority for top-notch centers

Even though radiation is complex, with the proper checks and audits in place, it can be made to be very safe. ​These safety checks are needed to catch any small (or large) mistakes that can occur during the radiation planning process. This includes double-checking the patient identification, the scan, the location and outlining of the tumor, the radiation design, patient positioning, and treatment machines.

​It's a long list. In other words, cancer centers should audit until they've got it.

Fortunately, among top-notch centers, radiation safety is a major priority. Many of the big radiation associations also make safety a top issue, including the American, European, Canadian and Australia/New Zealand radiation oncology societies, which have task forces and recommendations. But even with the recommendations available, some radiation centers will be more committed than others, with more safety checks in place.

As a patient, there's no way to double-check that each and every step is being done correctly.

​But there are a few key things to ask about.

What should I ask my doctors about my radiation?

​2. Does your center meet the quality assurance requirements from the American Association of Physicists in Medicine and the American Society for Radiation Oncology?
In countries outside the U.S., other similar guidelines might be used.

3. Will my radiation plan be double-checked by a second doctor?
This double-checking is called 'peer review'. A second set of eyes can catch mistakes and lead to changes in treatment. It is recommended, but not all centers do it.

4. Who else double-checks my radiation plan after it's done?
Additional checks by a medical physicist and a radiation therapist are important for helping to catch errors. Having every patient's plan double-checked by three people (or more) is a common approach.

5. How well am I being positioned?
Before each daily radiation treatment, images should be taken to make sure the positioning is correct. Ask your doctor if they have reviewed the images, and if there are any concerns.